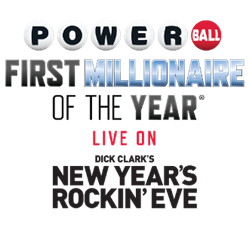 For the first time since the inaugural event in 2019, the finalists for the $1 million prize will return to New York City for a VIP experience, capped off by an exclusive New Year’s Eve gala in Times Square and the $1 million drawing. Each of the 29 finalists entered a second-chance drawing or contest held by one of the 29 U.S. lotteries participating in the POWERBALL promotion. The finalists advancing to the next round are:

As previously announced, country artist Jessie James Decker will return as the POWERBALL® co-host for her fourth year and will provide live updates throughout the evening, checking in with finalists celebrating at the POWERBALL New Year’s Eve gala, before revealing the “POWERBALL First Millionaire of the Year” alongside Ryan Seacrest just after midnight EST on January 1, 2023.

Last year, “Dick Clark’s New Year’s Rockin’ Eve with Ryan Seacrest” took viewers to each of the five finalists’ hometowns. Just after midnight, Brian Mineweaser from Honey Brook, Pennsylvania was named the 2022 POWERBALL First Millionaire of the Year. In 2021 and 2020, Carlos Mabry from Washington, D.C. and Blaine Marston from Passadumkeag, Maine were named the $1 million winners, respectively.

For more information on the “POWERBALL First Millionaire of the Year” promotion, please visit www.powerballrockineve.com.

ABOUT POWERBALL
It’s America’s Game! For the past 30 years, POWERBALL® has inspired the country with a chance to become a millionaire, while raising more than $28 billion for good causes supported by U.S. lotteries. POWERBALL set a new world record for largest jackpot on Nov. 7, 2022, when a ticket in California won a grand prize worth $2.04 billion. POWERBALL tickets are $2 per play. Tickets are sold in 45 states, the District of Columbia, Puerto Rico and the U.S. Virgin Islands. POWERBALL drawings are broadcast live every Monday, Wednesday and Saturday at 10:59 p.m. EST from the Florida Lottery draw studio in Tallahassee. POWERBALL drawings are also live streamed on Powerball.com.

ABOUT JESSIE JAMES DECKER
Singer, songwriter, TV personality, fashion designer, beauty and lifestyle influencer/entrepreneur, and 2x New York Times best-selling author, Jessie James Decker has emerged as a multi-platform juggernaut juggling fashion brands like her personally designed Kittenish line with four retail stores and growing, along with her television hosting duties. Signed to Warner Music Nashville, Jessie’s passion for music has made the multi-talented artist one of music’s true breakout firebrands. The singer’s authentic style immediately captivated listeners everywhere on her 2009 self-titled debut. She continued to keep it real with her second studio album, 2017’s Southern Girl City Lights, which debuted at No. 1 on Billboard’s Top Country Albums chart. Now it’s onto a new musical chapter of growth and empowerment with The Woman I’ve Become EP. Jessie lives with her husband, retired NFL player Eric Decker, and their three children, in Nashville, Tennessee.