It’s been exciting at the Lottery Claim Center. New Mexico had nine winners of $50,000 in last night’s draw and one winner of $100,000. And just last week a Loving construction worker won $2 million playing Powerball. 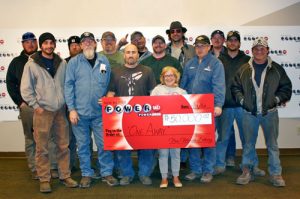 For the group, “One Away,” the win couldn’t come at a better time. They recently were told they would be laid off at the end of January.

Daniel Caspi of Albuquerque purchased the group’s winning ticket at Circle K at 1401 Coors Blvd. NW. This was the first time Caspi had ever bought a Powerball ticket. He checked the numbers after the draw and called one of his coworkers. “Dude, we were so close,” Caspi said. His coworker replied, “Are you kidding? No! We won $50,000!”

Group member Joe Finley has won before. A graduate of UNM, he was a recipient of the Legislative Lottery Scholarship.

When asked if they had advice for other players, the group said, “You can’t win if you don’t play!”

A second group of Albuquerque coworkers also claimed $50,000 today. The group, “Lucky 5” works in a local IT Department. They matched the four white ball numbers (4, 8, 27 and 34) and the Powerball number 10. They are Gladys Gonzales, Alexander Kenny, Michael Wilcox and Elizabeth Wagner of Albuquerque and Steven Peddy-Coart of Edgewood. They’ve been playing as a group for some time. Typically they each contribute $2, but this time they doubled their money and spent $4 apiece.  Their $20 Quick Pick paid off. 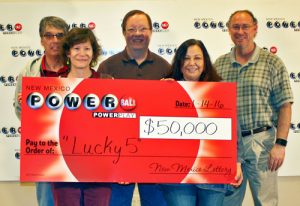 Group leader Elizabeth Wagner reminds players, “It only takes one.”

Winner Alex Kenny has also benefitted from the Legislative Lottery Scholarship. His son attended New Mexico Tech on the scholarship.

The winners purchased their ticket at Circle K at 8101 Harper NE in Albuquerque.

Three additional $50,000 winners also claimed their prizes today. They were Susana dela Paz and Eli Ramirez, both from Albuquerque and Maclovio Medina from Rio Rancho. 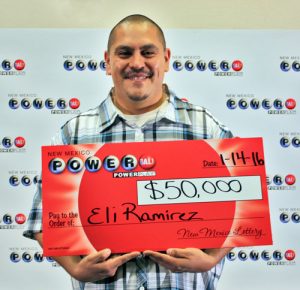 Dela Paz purchased her winning ticket at Smith’s at 200 Tramway SE in Albuquerque. She matched the white ball numbers (8, 19, 27 and 34) and the Powerball number 10.

Ramirez purchased his winning ticket at 7-11 at 2120 Broadway SE in Albuquerque. His wife, Lydia, selected their numbers based on birthdays, ages and years married. Their winning numbers were white ball numbers (4, 8, 19 and 34) and the Powerball number 10.

This is only the second time they’ve played. The first time they played was when the Mega Millions® jackpot reached $656 million in March 2012.

Mrs. Ramirez said, “Everything that happens is a blessing.” They plan to use their prize to put a down-payment on a home. 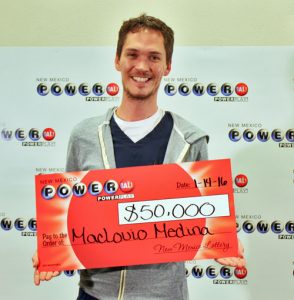 He plans to use his winnings to take a cruise and pay bills.