Leo Castillo purchased his lucky Powerball ticket at Love’s Country Store located at I-40 & Horizon Blvd. in Milan, NM.  For selling the $1 million winning ticket, the store is eligible for a $2,500 lottery bonus.

“I heard it on the radio last Friday and picked up a printout of the winning numbers. I just had a feeling it was me,” said Castillo. However, he did not have a chance to check the ticket until this morning.   Castillo plans to pay bills and fish in Alaska with his prize. 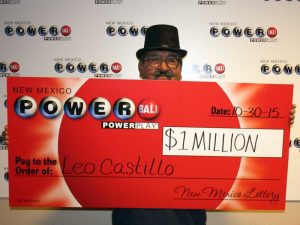 Since 1996, the New Mexico Lottery has raised $664 million for education and more than 97,000 students have attended college on Legislative Lottery Scholarships.