06/23/2015
ALBUQUERQUE – Joycelyn Toler, a lucky wife, mother and grandmother, is the latest winner from Clovis to win a big lottery prize. Toler won $50,000 playing the Monopoly Millionaires’ Club™ Scratcher game. On Thursday, Toler and her husband, Bill, drove to lottery headquarters in Albuquerque to claim the $50,000 prize, making this the third substantial prize recently sold in Clovis. 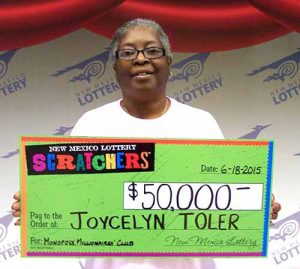 Toler drove to her usual lottery retailer near her home to buy a Monopoly Millionaires’ Club Scratcher. The clerk told Toler that the Scratcher game wasn’t available. That turned out to be the best news Toler received, spurring her to drive to Allsup’s Store #4 where she purchased the $50,000 winning ticket.

“God is great and certainly blessed us,” Toler told lottery officials. “We plan to buy new carpet, and then some,” the winner said with a big smile.

The TV game show is hosted by “Mike and Molly” star Billy Gardell and can be viewed in New Mexico on KOAT-TV every Saturday at 10:35 p.m.